A different kind of Palm Sunday 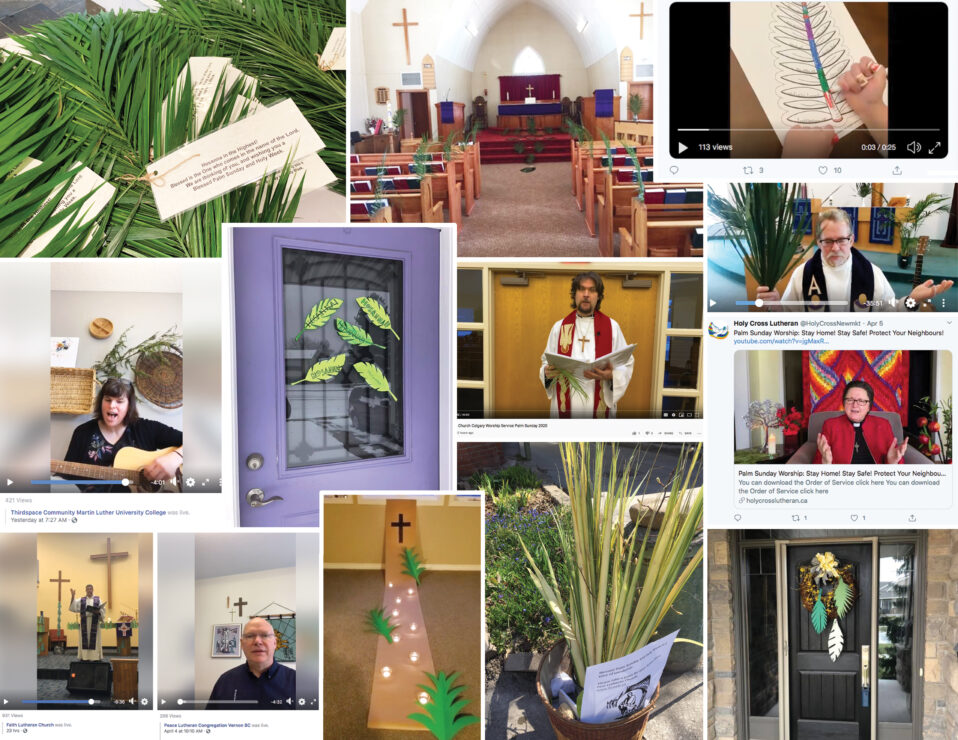 Historically, Palm Sunday has been a time to gather in community with one another, marking the last week of Jesus’ life and his glorious entry into Jerusalem on the Sunday until his death on Friday.

But how do we gather for Palm Sunday worship in a time of physical distancing? Recognizing the need to have everyone do their part to flatten the curve, Lutherans across the ELCIC find creative ways to worship together while apart on Palm Sunday 2020.

“Our goal on Palm Sunday was not only to have our congregation hear the story, but also get a chance to do something.” Smith says. “We wanted to let it be known that it was Palm Sunday, so our hope there was to have members either cut a branch from their back garden and put it in their windows, or if that wasn’t a possibility we had a colouring activity available.”

Smith says that along with normally distributed online material, his congregation received a children’s colouring sheet, which went over quite well amongst the community. “We had some people sending in photos or videos of families putting up branches,” Smith reflects. “Others were colouring the palm leaves with crayons or markers and then showing palm branches or palm crosses up in the windows of their neighbourhoods. The kids really enjoyed it, and still get to see them in the windows.”

In Kitchener-Waterloo, Rev. Mark Ehlebracht virtually welcomed National Bishop Susan Johnson to his congregation for Palm Sunday. St Peter’s – which has been broadcasting its Sunday morning services on television since 1961 – carried on with business as usual, worshipping live in real time, with some help from the National Bishop.

“We were able to incorporate a message from Bishop Susan into the broadcast, and it was very well received,” Rev. Ehlebracht says. “Television ministry is particularly noteworthy to the extent that it reaches everyone, regardless of mobility, geography, as well as those who might find themselves out of social media or web-based circles. It works for those who have limited internet or don’t have a tablet, smartphone or access to a computer. To have people submit their prayer requests from across the country, it’s amazingly mind blowing. I cannot underscore just how humbling it is.”

In Manitoba, the congregations of Abundant Life, Prince of Peace and Messiah each found ways to incorporate the use of palms into their online services.

“At Prince of Peace we had some volunteers who went out distributing palm leaves to members, while at Abundant Life, the youth actually did it,” says Rev. Jeremy Langner. “While practicing social distancing, the youth and a few leaders picked up the palms and distributed them to the families that wanted them. They even recorded a little video of themselves in the parking lot waving their palm branches and singing ‘Ride on King Jesus’.”

Down the road at Messiah, church council and worship committee members helped arrange a drop-site for a congregational palm pickup. “The youth helped out and it was much like you might see for a ‘safe food drop-off’, with gloves being worn and no touching involved,” says Rev. Courtenay Reedman Parker. “We invited people from the congregation to come by; it went like clockwork. Those unable to stop by the church had palms dropped off at their houses.”

Messiah has also taken a number of steps to remain in fellowship during the pandemic. The congregation now broadcasts Sunday worship live on Facebook, while streaming midweek Lenten services and evening prayers. Using Zoom for meeting online has been a hit for youth activities, Sunday school events and even a Wednesday morning ‘Coffee and Connect’ amongst its available members.

“Even though we can’t physically be together, we are united as the body of Christ wherever we happen to be,” Rev. Reedman Parker says. “And there are ways in which we have a unique ability at this time in history that we can connect with one another, whether that’s in a Zoom call, on a Facebook livestream, or even delivering palm leaves.”

Your ticket for the: A different kind of Palm Sunday

A different kind of Palm Sunday